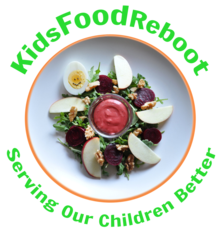 ​DEBUNKING 'KIDS FOOD': Lynn Fredericks chats with the team at Better Together about the myth of 'kids food.'

​First Bite challenges children across the country to try a bite of a new and nutritious food. Not candy, sweets or junk food. It could be a fruit or vegetable, raw or cooked, they have never tasted or an unfamiliar dish at a restaurant or family meal. Just a bite. They are encouraged to take a video of that first taste, challenge their friends to do the same and post the video and their challenge to social media with the hashtags #firstbitechallenge #kidsfoodreboot  Simple. Healthy. Fun.

​“Parents often encounter big hurdles to get their kids to take that first bite of something new,” says FamilyCook founder Lynn Fredericks. “First Bite Challenge is designed to support them and turn the process into a fun, social media activity.”

​First Bite Challenge grew out of theFamilyCook’s Kids Food Reboot: Serving Our Children Bettercampaign whose goal is to have chefs and restaurateurs rethink the ubiquitous “kids foods” and help parents expand their children’s food experiences and preferences. While it will take a cultural shift to make wholesale changes in our culinary landscape, Kids Food Reboot is one step in that direction. Top chefs across the country have been enlisted to adapt one or more of their restaurant’s popular adult menu items for 4 to 8 year-olds. The chefs include Border Grill’s Mary Sue Milliken in Los Angeles and Las Vegas, Equinox’s Todd Gray in D.C., Bantam + Biddy’s Shaun Doty in Atlanta, and Bayou Bakery and The Travel Channel’s American Grilled host David Guas in Va., among others. The chefs a steered to choosemyplate.gov which provides guidelines to make the amount of protein smaller in proportion to whole fruit, grains and vegetables.

​Fredericks conceived the Kids Food Reboot campaign and First Bite Challenge because she understands that most parents are flummoxed about how to get their children to eat a larger variety of healthy foods.  She has seen firsthand that children can embrace delicious, interesting and, even unfamiliar flavors under the right circumstances. For the past 19 years since founding FamilyCook, the organization has taught healthy cooking skills to thousands of K-12 students across the country.  Research conducted on FamilyCook’s culinary programs has shown that children are willing to try new foods and embrace them in a supportive environment.

​Chef Gray, father of a teenaged son, agrees. “With the right encouragement, kids will eat anything.”

FamilyCook Productions (FCP) www.familycookproductions.com is a nonprofit organization founded in 1995 to teach nutrition through cooking to K-12 students and their families. FCP has reached over 200,000 families nationwide and spawned over 130 programs in 26 states. Along with HealthCorps and Albert Einstein College of Medicine, FCP is collaborating on an NIH funded research project to determine best practices to change behaviors that have been shown to cause obesity. FCP was founded by Lynn Fredericks, cookbook author, food activist and food and wine journalist. She is the author of Cooking Time is Family Time (William Morrow 1999) and, with Mercedes Sanchez, MS, RD, Get Your Family Eating Right! (Fairwinds Press, August 2013)

Taco Reboot - A Free Cook-off and celebration of food day

In honor of Food Day 2014, FamilyCook Productions hosted a special event for current and former Teen Battle Chefs. The chefs were tasked with creating a unique taco dish that everyone in their family could enjoy, adults and children alike!

Our teen chefs rose to the occasion and created some delicious and creative dishes, including sweet tacos made with fresh fruit and yogurt. See photos of the events and meet our two winners, Kelcey and Rose, here.

Kids Food Reboot was excited to be featured in the Washington Post and read about kids' experiences visiting Chef Todd Gray's restaurant, Equinox, in Washington DC. Read a short excerpt below. Find the full article here.

"All that was left of Julia Washington’s seared-scallop entree were the baby artichokes. The 10-year-old speared one with a fork, eyeing it with curiosity and contempt.

“I don’t know about new things. I don’t know how they taste,” the fifth-grader from Upper Marlboro said at the restaurant Equinox. “It looks like a mushroom. I don’t like mushrooms.”

Julia is a typical child. She loves mac and cheese, fried shrimp, ice cream. But she couldn’t order from the kids’ menu that night, because Equinox has no kids’ menu. The restaurant’s chef, Todd Gray, does not believe in kid food.

“With the right encouragement, kids will eat anything,” Gray said.

Most restaurants don’t give children many choices: chicken fingers. Tater tots. Or bland, cheese-laden pizza, accompanied by a cup of limp fruit salad. And some parents are getting tired of it.

“The idea that there is different food for children drives me nuts,” said Lynn Fredericks, founder of Family Cook Productions, an organization that teaches healthful family eating. She recently launched the Kids Food Reboot, a campaign to get restaurants to adapt their kids’ menus to rely less on frozen french fries and other beige fried foods and more on healthful, fresh and — most important — interesting choices for young diners. Given the chance to eat, say, spaghetti squash or broccoli rabe, children will rise to the occasion, Fredericks says."